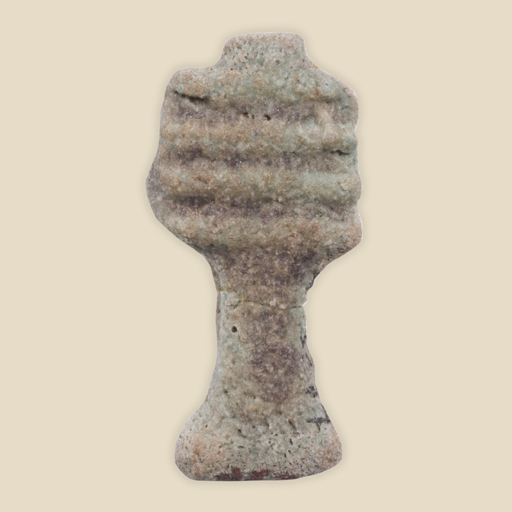 These make up a set, or part of a set, of protective amulets.

They are from Dendara. Amulets gave protection to the deceased in the afterlife. They linked the dead person to gods and to ideas of rebirth, to ensure that they did live forever. The djed pillar, a very popular funerary amulet, was a symbol of Osiris, a god of the dead. The hawk was a symbol of Horus, and the baboon-headed figure of Hapy represented one of the Four Sons of Horus who protected the internal organs of the dead. The winged scarab was linked with the sun and symbolised rebirth. The heart amulet protected the heart of the deceased. The mummy laid out on a bier symbolised the hope of all Egyptians that their body would be preserved for ever after death, whilst the round sun disc linked the mummy with the sun-god to be reborn each morning.The triangular plummets helped to ensure eternal equilibrium.Museum Register Numbers H 3477- 3484 These make up a set, or part of a set, of protective amulets. They are made from faience. They are over 2,000 years old, dating to the Ptolemaic Period, 332-30 BCE.