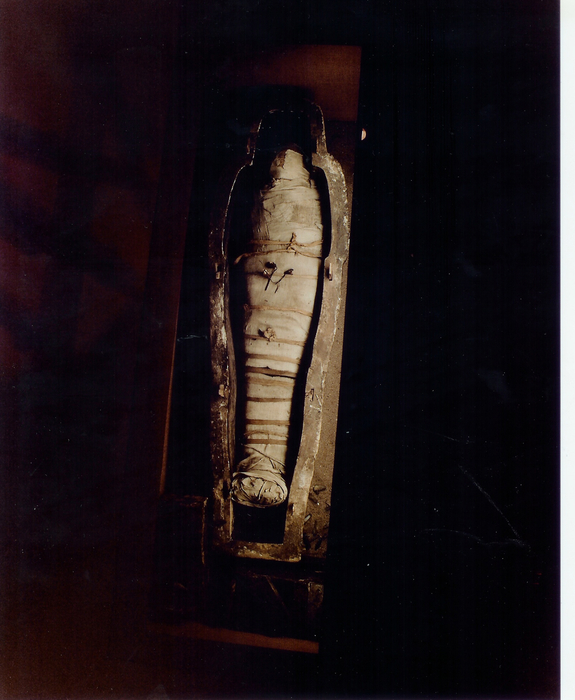 This is a coffin with a mummy inside, museum Register number H638.

It is from a grave in Dra Abu el Naga, Thebes. During the 22nd Dynasty, burial customs changed. The elaborately painted coffins of earlier periods were replaced by plain black coffins with simple gold line decoration. This coffin is typical of the style. The gold hieroglyphs on the coffin lid have faded and the name of the dead person cannot be read. We know from radiographs (X-rays) that the body is that of a man aged about 30.

The body is wrapped in undisturbed bandages, with decorative red bandages forming the last layer of bandaging. When the coffin was opened by archaeologists, there was a headrest under the mummy’s neck, and a lotus flower on his stomach. There was also a clay figure wrapped in cloth beside his head, but this is not in the Bristol collection.

Both burials in the tomb had an inner and an outer coffin. The tomb was very small, and the archaeologists excavating it could not take the coffins out without removing the lids of the outer coffins. The outer coffin is not in the collection here. This is a coffin with a mummy inside. The coffin is made from wood with gold decoration; the mummy is wrapped in linen bandages. They are almost 3,000 years old, dating from the 22nd Dynasty (about 945-715 BCE) in the Third Intermediate period.