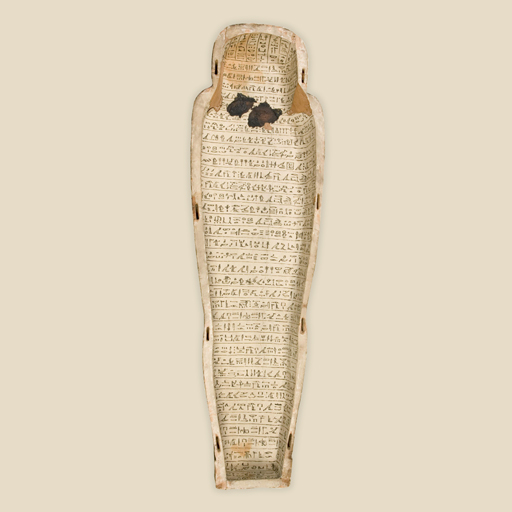 This is the base of the coffin of a woman named Iy-en-Amen-nay-es-nebet-ta.

It is from Thebes. The coffin belonged to a woman called Iy-en-Amen-nay-es-nebet-ta, Lady of the House. Her father was God’s Father of Amen, Goldworker of the Estate of Amun, Hor-udja. Her mother was Lady of the House, Tabes. Her coffin is typical of the period, covered outside with texts and images of gods, and inside with more prayers that will protect the dead woman and help her in the Afterlife. Note that the mummy must have been too big for the coffin, so the wood was hacked out to fit. The black mark is a form of bitumen or resin used in the wrapping process which has dripped onto the base of the coffin. This is the base of the coffin of a woman named Iy-en-Amen-nay-es-nebet-ta. It is made from wood. It is over 2,600 years old, dating to the 25th or 26th Dynasty (675-640 BCE) in the Late Period.