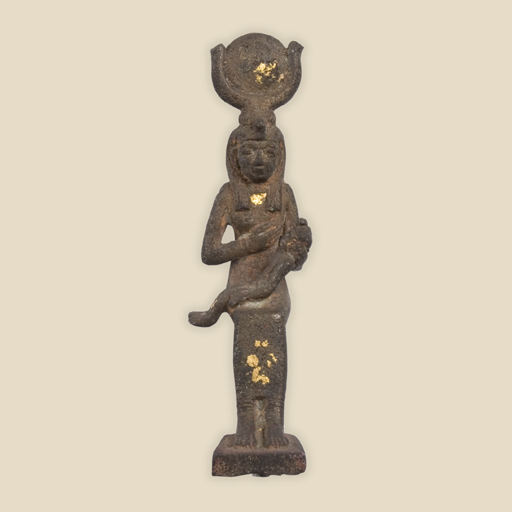 This is a votive statue of the goddess Isis, suckling her son Horus.

It is from Egypt but the exact location is unknown. A woman might offer a votive statue of Isis to the temple, in the belief that it would protect her and her children. Isis was the protective mother goddess, having brought her husband Osiris back from death and conceived a child, Horus, who went on to avenge his father’s murder by his uncle Set. Many such statues were made. This one was more ornate than usual, being gilded. The statues originally had a wooden plinth or throne, but few of these have survived. This is a votive statue of the goddess Isis, suckling her son Horus. It is made from a copper alloy and gold. We do not know how old this object is, though this type of votive offering is usually from the Late Period (747-332 BCE) and so about 2,500 years old.