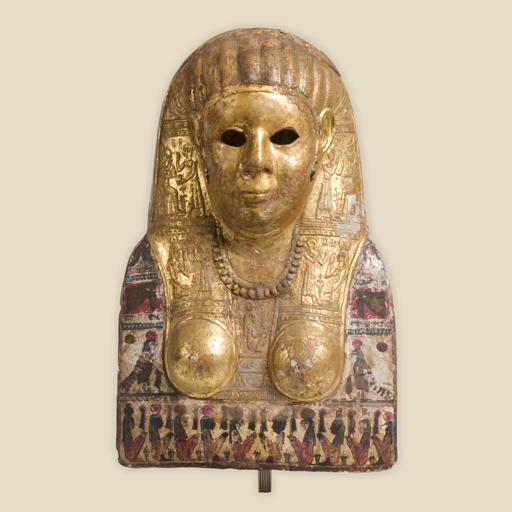 This is a toy horse.

It is from Hawara. From about 4,000 years ago, a mask was an important part of the finished mummy. It was placed over the head of the bandaged body. As with other funerary trappings, it protected the body and ensured rebirth. It linked the dead with the gods: the face was often gilded, as the Egyptians believed that the gods had gold skin. This mask, which shows an older woman, also has gods holding the feather of truth or maat painted on the bottom edge.It was vital that the head was preserved, as without it the dead could not see, hear, breathe, speak or eat. The mask helped protect the head, by surrounding it with gods. If the worst happened, the mask could also substitute for the head so that the dead could continue to live in the Afterlife. This is a cartonnage mask for a mummy. It is made from cartonnage and gold. It is over 2,000 years old, dating to the Ptolemaic Period, 332-30 BCE.