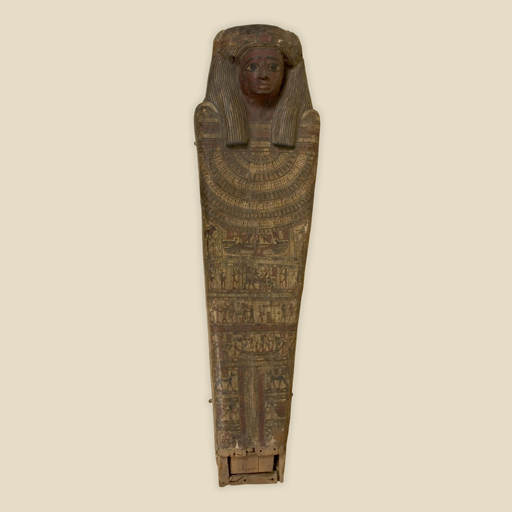 This is the coffin of a man called Pedi-tehuty.

It is from Meir. Pedi-tehuty was Steward of the temple of Hathor, Lady of Qusiya. His father was Wer-benbeny, his mother was Mer-es-Mut. His coffin was typical of the Late Period: below a broad collar with falcon head counterpoises, there are protective imagesof gods. The goddess Nut, with outspread wings, sits above the god Anubis tending the mummy, with the goddesses Isis and Nephthys mourning at the head and feet. Below this is the Weighing of the Heart ceremony, with the ‘justified’ dead led before an offering table piled with food. Near the feet are the Four Sons of Horus in a boat, and two jackals, symbols of the god Anubis, guardian of the cemetery. This is the coffin of a man called Pedi-tehuty. It is made from wood. It is over 2,300 years old, dating to the 26th-30th Dynasty (550-350 BCE) in the Late Period.