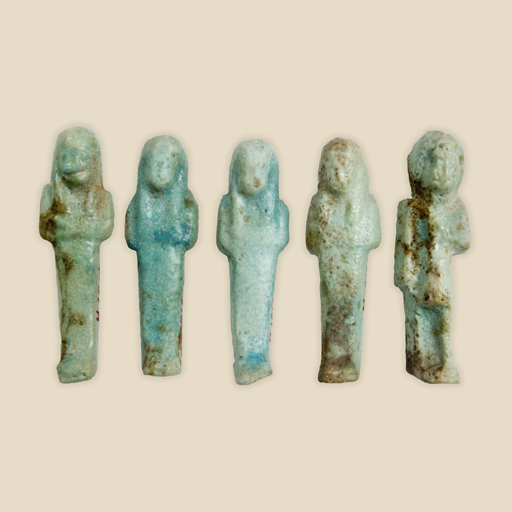 These are shabtis. They are from Abydos. Shabtis developed from the model figures placed in tombs in the Middle Kingdom (about 2055-1650 BCE). At first, the dead were provided with just one shabti, but as time went on, more shabtis were provided. The dead person could have one to work every day of the year, with some overseers to control them. This meant a total of 401. Most people did not have that many, but might be provided with several to do the work in the Afterlife for them. These five small ones may be all their owner had, or they may be all that was left in the tomb after robbers had opened it. The shabti with one arm by his side is an overseer. There is no inscription, so their owner is unknown. These are shabtis. They are made from faience. They are at least 2,300 years old, made during the Late Period (747-332 BCE).