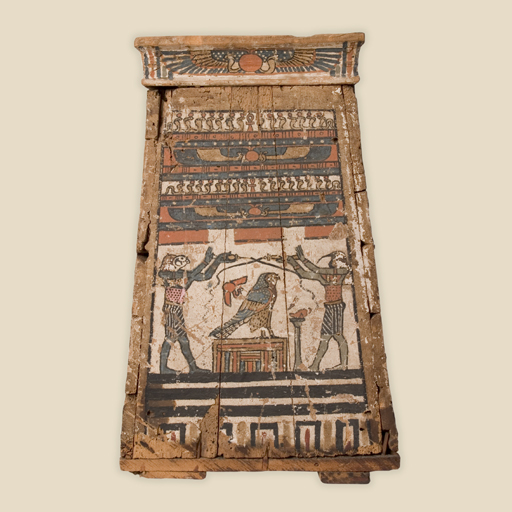 This is a shrine box.

It is from Egypt but the exact location is unknown. It may be from Akhmim (Khemmis Panopolis). Shrine boxes were placed in shrines with funerary statuary or offerings in them. This box may have been made to hold mummified ibises, as an offering, but the contents nd the lid are now missing. The box is made from small planks of wood, closely fitted and probably held with dowels, as are the corners. A skim of gesso gave a smooth surface for an artist to paint. The gods Horus and Thoth pour a purifying libation over a ba-bird, watched by the kneeling figures on the sides. Someone has sawn the edges of the base flat with the sides, damaging some of the paintwork in the process. We don’t know if this was the carpenter who made it, or if it was done later for some reason. This is a shrine box. It is made from wood. It is between 1,600 and 2,350 years old, dating to the Ptolemaic or Roman Period (332-395 BCE).