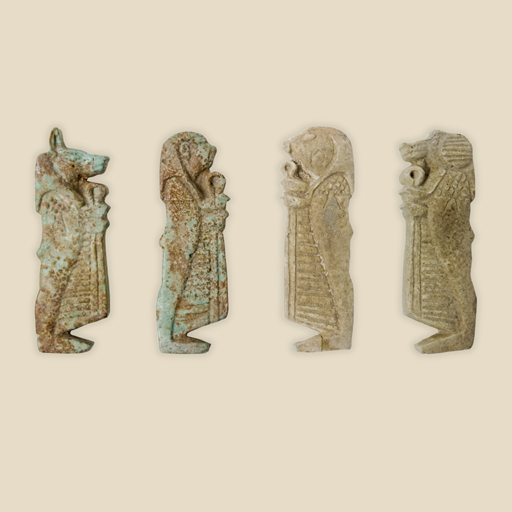 These are amulets of the Fours Sons of Horus.

They are from Egypt but the exact location is unknown. The amulets depict Duamutef, the jackal head; Imsety, the human head; Qebhsenuef, the hawk head; and Hapy, the baboon head. These Four Sons of Horus were the guardian gods of the internal organs. They protected the contents of the four canopic jars. From the time when the internal organs were dried and replaced in the body, rather than in jars, small figures of the gods were placed with the organs. When canopic jars were back in use later on, the Egyptians kept the images of the gods as decorative and protective amulets sewn onto the mummy’s bandages or bead network cover. These are amulets of the Fours Sons of Horus. They are made from faience. We do not know how old they are.