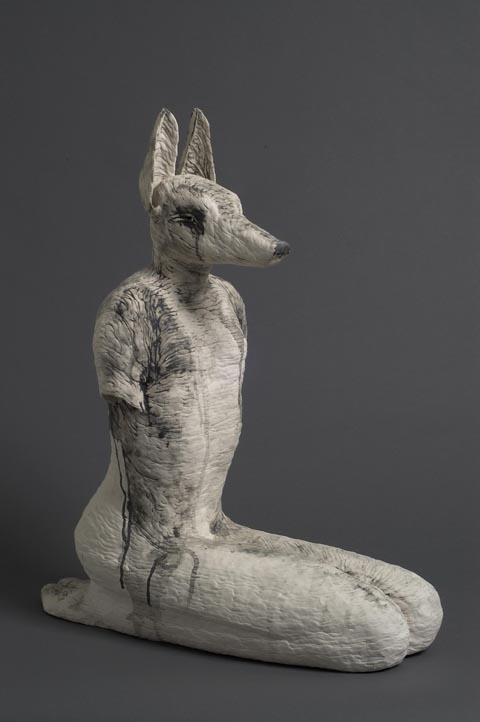 Christie Brown The Kneeling Jackal. This human animal hybrid figure made in 2007 is part of a series which reflects my interest in archaic figurative works and ancient Egyptian sculpture. While exploring the significance of continuity and the relevance of archaic artefacts to a contemporary artist, the series referenced the artefacts of ancient Egypt and explored the relationship between humans and animals through symbolic representation. The human/animal hybrid reflects our need to project a variety of emotions and ideas onto the animal world, which we simultaneously both revere and exploit. Inspired by archaeology and its parallel with psychoanalysis, as a means of discovering and preserving knowledge through the uncovering of fragments, the work alludes to the powerful charm of the animal deities within sacred Egyptian art. Freud possessed a large number of figurative Egyptian antiquities and he used the image of a fused human and animal to describe the way two dream images can be condensed together. My mainly figurative ceramic practice has largely been inspired by ancient artefacts and archaic figures from museum collections. I respond to their worn condition, their incomplete narrative and their fragmented state. My practice has evolved over many years through a gradual engagement with discourses from these other disciplines, like anthropology, archaeology and psychology, which deal with the way human beings live. By examining museum culture, I am engaging with many strands of thought about relationship, context, media and arrangement through an interest in the connectedness between objects and the significance of their narratives in our everyday lives. The work is made from T material, painted with layers of vitreous slips which add colour and texture without the final covering of glaze. I mostly use the processes of casting and press moulding to make my work. However this series developed from a residency in the USA which allowed me to explore a different method and this figure is made in a more direct way, building up the form with small pieces of clay. 2012.