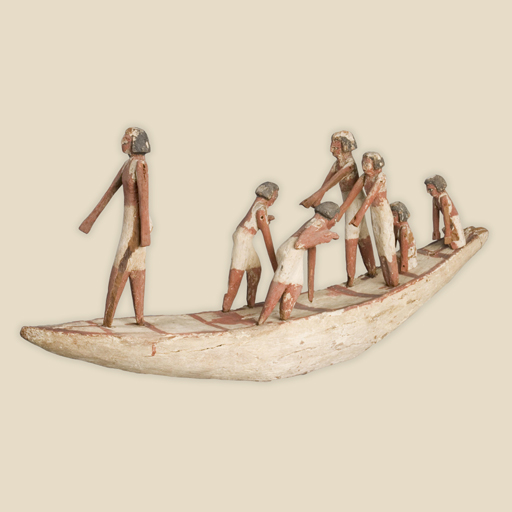 This is a tomb model.

It is from grave 275 at Beni Hassan. The Nile was the main ‘road’ for travelling in ancient Egypt. Most people and goods travelled by boat up and down and across the river. A model boat meant that the tomb owner could travel in the Afterlife. Two model boats were needed, one with a sail for travelling south, upriver, with the prevailing wind, and one with rowers for going north, downriver, with the current. This boat was found in a tomb, placed on top of the box containing the coffin and mummy. This is the sailing boat. Also on the coffin, but facing in the other direction, was a boat with rowers. This is a tomb model. It is made from wood and has been painted. It is 4,000 years old, and dates from the early 11th Dynasty in the Middle Kingdom, about 2055-1985 BCE.