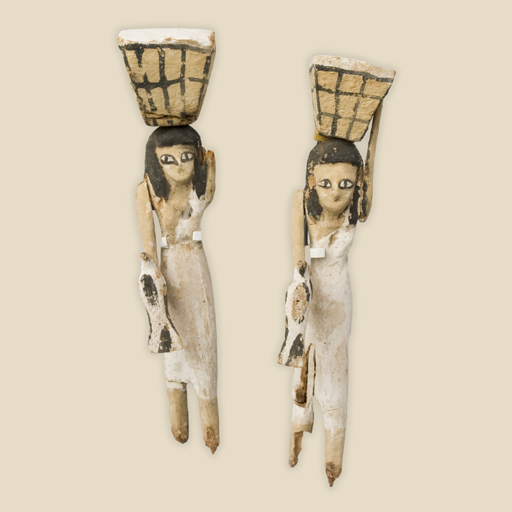 These are a pair of tomb models.

They are from Egypt but the exact location is unknown. Wooden figures of women carrying offerings were common in tombs of this period. Often they were made in pairs, and formed part of a procession of priests and offering bearers. They may represent a real or imaginary farm which supplied the dead person with food. The ancient Egyptians believed that the food shown would become real when needed to feed the ka of the dead person.These two carry a square basket on their heads, possibly filled with flour. In their hand, they carry a duck or goose by its feet. These are a pair of tomb models. They are made from wood and have been painted. They are at least 3,800 years old, dating to the 6th-12th Dynasties (about 2250-1850 BCE) in the Old Kingdom, First Intermediate Period, or Middle Kingdom.