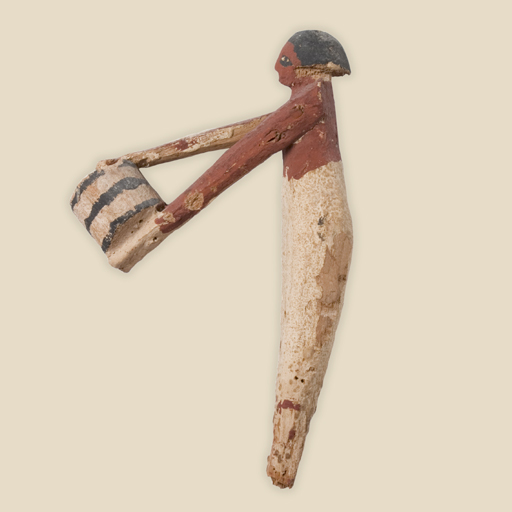 This is a granary worker model of a standing male figure.

It is from Beni Hassan, in Grave 275. The labouring poor made up the mass of the population of ancient Egypt. Unlike the rich, they did not commission statues of themselves, or leave images carved on stele in their tombs. They could not afford such extravagances. We do get an image of the poor of ancient Egypt from the wall paintings in tombs, or from the wooden servant figurines that were included in tombs to provide the deceased with provisions in the Afterlife. As in life, the rich expected to have servants to work for them. This one carries a bucket with which he could measure the grain as it was put into a granary. This is a granary worker model of a standing male figure. It is made from wood. It is between 3,800 and 4,070 years old, dating to the 11th or 12th Dynasty (2055-1795 BCE) in the Middle Kingdom.