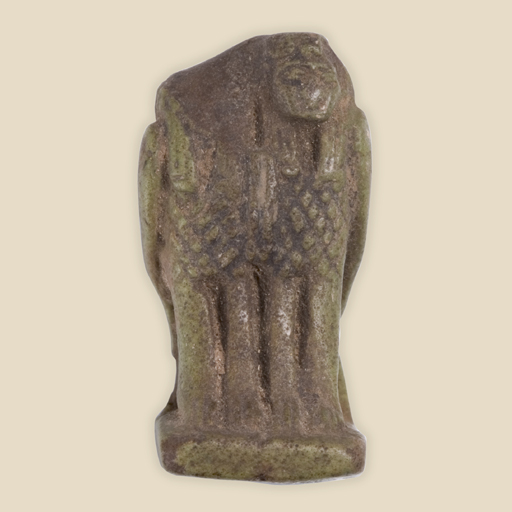 This is an amulet of a ka and ba.

This object is from Egypt but the exact location is unknown. The ba was one aspect of a person that survived after death. It is often translated as ‘soul’ though this is a very simplified idea of the ba, and ‘personality’ might be closer to the ancient Egyptian idea. The ba could travel between the tomb and the underworld, but it had to return to the body at night. The ka came into being when a person was born, and lived on after they died. It is often translated as ‘spirit’, though again that is a simplified idea and ‘life-force’ is closer to the original sense. This amulet combines the ba and ka as a bird with two human heads. The reuniting of the ka and ba after death allowed the dead to live on as an akh. This is an amulet of a ka and ba. It is made from dark green faience. It is probably over 2,000 years old, and is thought to date to about the Ptolemaic Period (747-30 BCE) in the Late Period.