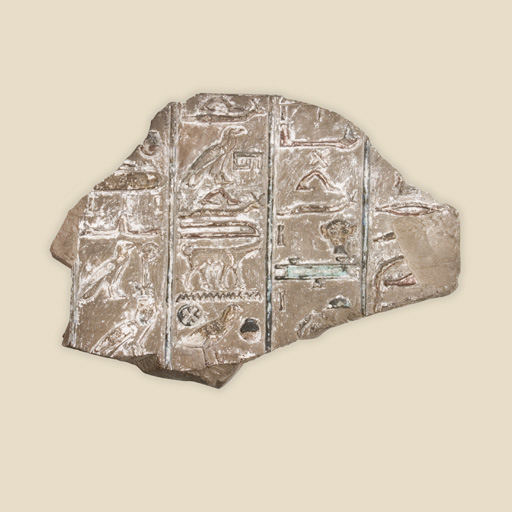 This is a fragment from the wall of the tomb of Sety I.

It is from Grave KV17, in the Valley of the Kings, at Thebes. After Belzoni re-discovered the tomb in 1817, it became a major attraction. The many visitors over the years did much damage to the tomb, much of it unintentional but some deliberate. Some took away broken bits as souvenirs, others hacked bits out of the wall. Some of the damage was caused by tourists, some by Egyptologists, some by collectors acting for their national museum. This fragment, possibly from a corridor wall, shows the original paint and the immense work involved in carving out the solid rock into low relief. Museum number Ha7929 This is a fragment from the wall of the tomb of Sety I. It is carved from limestone and painted. It is about 3,250 years old, dating from the reign of Sety I (about 1294-1279 BCE) in the 19th Dynasty, in the New Kingdom.