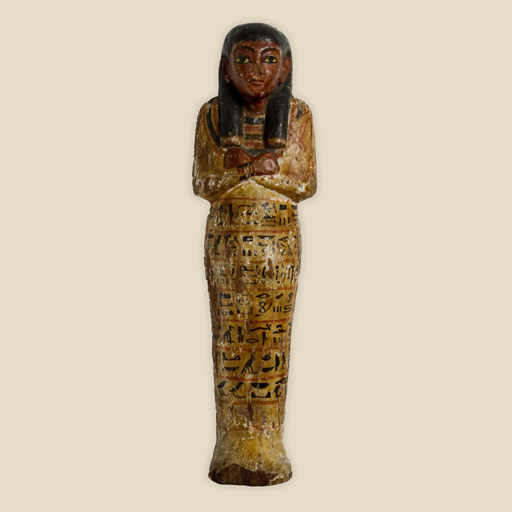 This is a shabti.

It is from Egypt but the exact location is unknown. A shabti or ‘answerer’ inscribed for Neb-diu-upu. The inscription on a shabti usually has part of the prayer to bring the shabti to life and the name of the owner. This is not an Egyptian name, so the owner was probably a foreigner living in Egypt, who had adopted Egyptian ways. Many shabtis were made of faience, this example is carved wood, covered in a skim of gesso or plaster to give a smooth surface, and painted. The long inscription is Chapter 6 of the Book of the Dead, giving the prayer that brings the shabtis to life. Many shabtis similar to this one have been found in the workman’s village of Deir el Medina. This is a shabti. It is made from wood. It was made during the reign of Tutankhamun and is more than 3,300 years, old dating to the 18th Dynasty, New Kingdom, about 1336-1327 BCE.