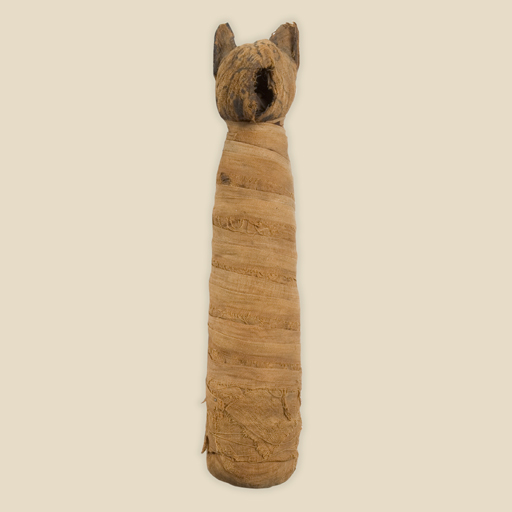 This is a mummified cat.

It is from the burial chambers around the temple at Istabl Antar near Beni Hassan. Bastet was the cat-goddess and local deity of the town of Bubastis. In the Late and Ptolemaic Periods (about 747-30 BCE), priests at her temples began killing cats to mummify them. The mummified cats were sold to people coming to worship Bastet, and left at the temples as offerings. This mummy was x-rayed and scanned at Manchester Royal Infirmary in January 2007 and was found to contain a complete cat skeleton with a collapsed face. There was a post-mortem fracture of the neck. The bandages were covered with net as part of the treatment by textile conservators in Spring 2007. This will protect the bandages while on display. This is a mummified cat. It is made from animal bone wrapped in linen. It is about 2,300 years old, dating from the Late Period (about 747-332 BCE)