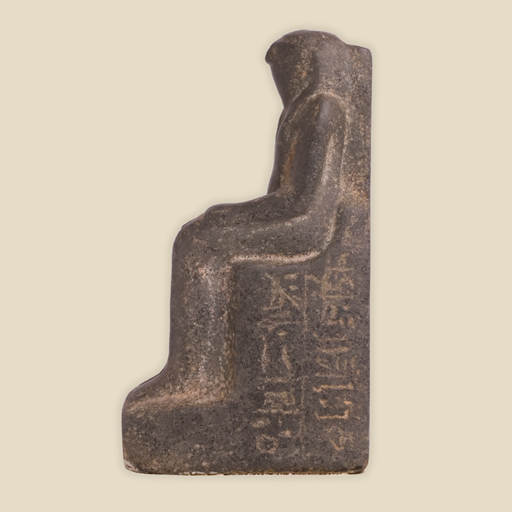 This is a statue of the god Horus

It is from Tell Atrib. Horus was depicted as a hawk or as a man with the head of a hawk. He was god of the sky, the embodiment of divine kingship and protector of the reigning pharaoh. Ra-Harakhte (Horus of the two horizons) was another version of Horus, identified with Ra and the daily voyage of the sun from horizon to horizon. The two deities combined to become Ra-Harakhte. He was represented as a falcon or a falcon-headed man wearing the solar disk and double crown or the uraeus and the atef crown. This votive statue has the inscription ‘Horakhty Lord of Kemwet [Tell Atrib] for the life, prosperity and health of the Custodian Nebu-nakhte’, the donor. This is a statue of the god Horus It is made from stone. It is over 3,000 years old, dating to the 19th or 20th Dynasty (1295-1069 BCE) in the New Kingdom.