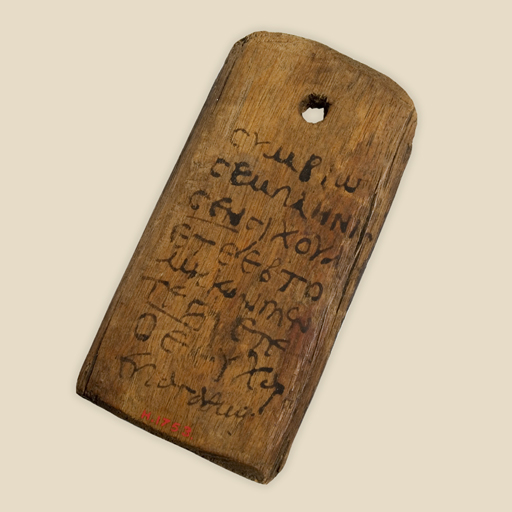 This is a mummy label with Coptic writing on it.

It is from Egypt but the exact location is unknown. Mummy labels were a means of identifying mummies. The mummy might be transported from where the person died to their home town: it was certainly moved from the embalmers’ workshop to home and then to the cemetery. A label tied to the mummy ensured that the right body was returned to the family, and recorded the person’s name for ever. They were also useful when mummies were kept in large family vaults and priests needed to identify which body needed offerings made to them. Mummy labels were used in the Ptolemaic, Roman and Byzantine or Coptic periods, and usually give the name and parents’ names, and the address of the dead person. This is a mummy label with Coptic writing on it. It is made from wood. It is probably less than 2,000 years old, dating to about 395-641 CE in the Byzantine Period.