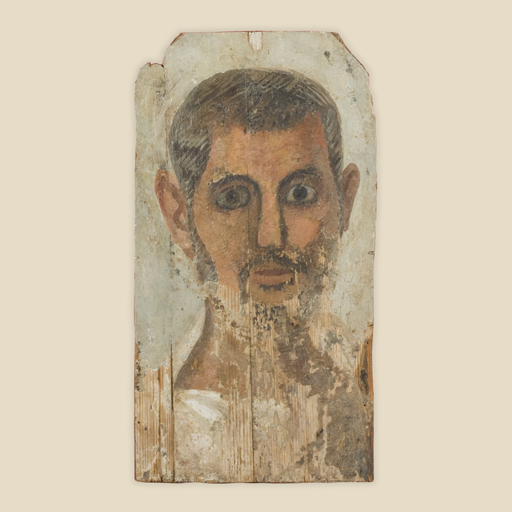 This is a mummy portrait used for burial.

It is probably from Hawara. Greek and Roman settlers in Egypt adopted the practice of mummification of the dead. In the Roman period it became fashionable to place a life-like portrait of the deceased over the face of the mummy, held in place by bandages. The portrait may have been painted to carry in a procession of the body around the town or village, then it was given to the embalmers to fit onto the mummy. Those buried like this were from the upper level of society. Not all Roman-period mummies had a portrait, as not everyone who could afford mummification could afford the extra required to pay the artist. There is not much of the original paint left on this portrait. Much of what you see is ‘restoration’ done in the past. The bottom corners carry an impression of the weave of the bandages. The embalmers wrapped the painting with the bandages, to hold it in position over the face of the mummy. This is a mummy portrait used for burial. It is made from wood, painted in encaustic (pigments mixed with beeswax). It is less than 2,000 years old, dating to the Roman Period (AD 100-250).