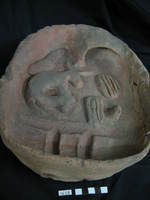 This is an oval offering platter with raised sides.

It is from Egypt but the exact location is unknown. Offering platters were placed at the mouth of the grave shaft in poorer Middle Kingdom tombs to provide the dead with food and water in the Afterlife. They range in complexity from a tray with modelled food to a representation of a house. Egyptologists called them ‘soul houses’, although they probably provided food rather than a home for the dead.Such offerings give an idea of food and cooking in ancient Egypt. Here the food is beef in the shape of a whole animal and a leg. Many of the poorer people would not usually eat meat, but it was a luxury that people wanted in death at least. This is an oval offering platter with raised sides. It is made from clay. It is almost 4,000 years old, dating to the 12th Dynasty (1985-1795 BCE) in the Middle Kingdom.