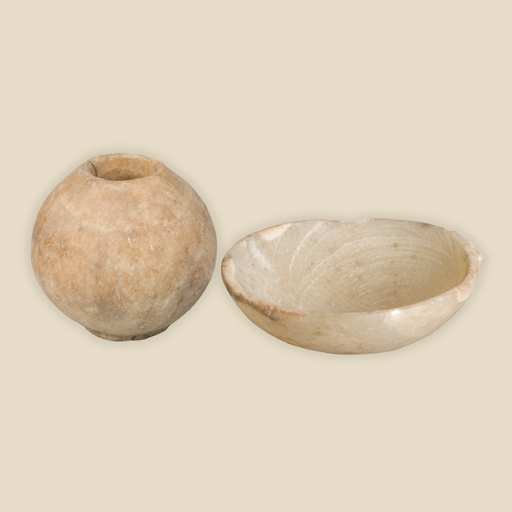 These are a pot and bowl.

They are from grave D226 at Abydos. The thick, round stone pot is slightly asymmetrical and may have been unfinished. Most Egyptian alabaster pots are symmetrical and very well finished. The pot has a large crack on one side and it is not clear whether this happened during the making of it or accidentally later. If it happened during manufacture, this could account for it being left unfinished. As a pot for the Afterlife, it would be complete when needed. The small Egyptian alabaster bowl may have held a food offering, or it may have been placed in the grave to give something to eat from. These are a pot and bowl. They are made from a stone called Egyptian alabaster. They are at least 3,300 years old, dating to the 18th Dynasty in the New Kingdom (about 1550-1295 BCE).