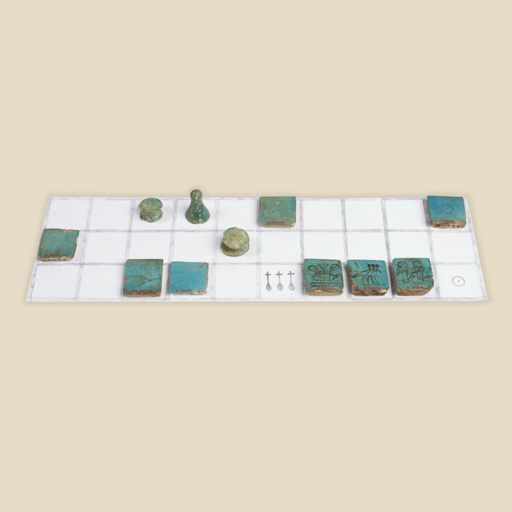 These are squares from a senet gaming board.

It is from grave D6 at Abydos. Senet, the ‘passing game’ was widely played in ancient Egypt. These faience pieces are the squares from a senet board. The board consisted of three rows of 10 squares. Five of the squares had a sign on them: landing on these squares could stop a player from moving or send them back several squares. The aim of the game was for a player to move all their playing pieces (five or seven) off the board first.The game was played for fun by two players, but it may have been played by one player for a religious purpose. Here the aim was to help ensure, when the player did eventually die, a safe journey through the underworld to everlasting life. These are squares from a senet gaming board. They are made from faience. They are about 3,200 years old, dating to the 19th Dynasty in the New Kingdom (1295-1186 BCE).