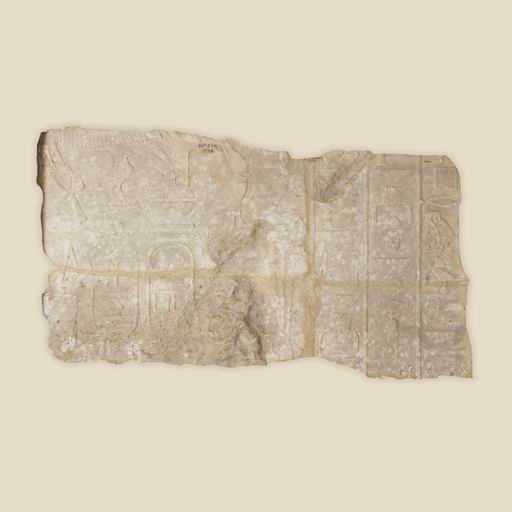 This is a stone temple relief with a hieroglyphic inscription of Pharaoh Senusret III on it.

It is from the Temple of Senusret III at Ihnasya el-Medina (Henen-Nesut, Heracleopolis Magna). This inscribed slab is from a wall in the temple of Senusret III. It was reused to build the back wall of the temple in later times. Senusret III was one of the strong pharaohs of Egypt. He centralised the administration, to keep better control of the large country, and led the Egyptian army against the enemies on the frontiers, strenghtening the borders. The inscription, which is incomplete, reads: ‘The Horus […], the Dual King, Lord of the Two Lands, Khakau-re, Son of Re of his Body, Senusret, given life. […] every unguent, all health, all offerings, all [stabil]ity, all joy, before me, li[fe] go forth with the Lord of the Horizon […]’. This is a stone temple relief with a hieroglyphic inscription of Pharaoh Senusret III on it. It is made from stone. It is over 3,800 years old, dating to the 12th Dynasty in the reign of Senusret III (1874-1855 BCE) in the Middle Kingdom.