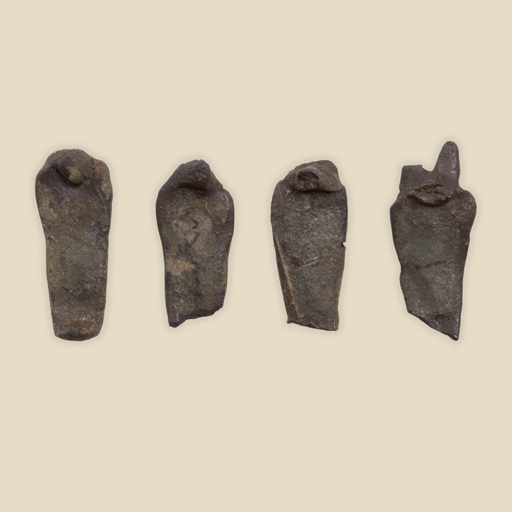 These are Sons of Horus amulets. They were known as Duamutef, Hapy, Imsety, and Qebhsenuef.

This object is from Egypt but the exact location is unknown. From the 21st Dynasty it became common to replace the dried internal organs inside the body, rather than put them into a set of canopic jars. With each package was placed a small wax figure of the appropriate son of Horus. These figures were ‘found within the mummy unrolled in the theatre of the [Bristol] Institution 1852’. At least two mummies were unwrapped at the Institution on Park Street, this suggests a third public unwrapping. These are Sons of Horus amulets. They were known as Duamutef, Hapy, Imsety, and Qebhsenuef. They are made from wax. They are between about 3,000 and 1,600 years old, dating to the 21st – 30th Dynasty (about 1069 BCE – 343 CE) in the Third Intermediate Period, Late Period, Ptolemaic Period or Roman Period.