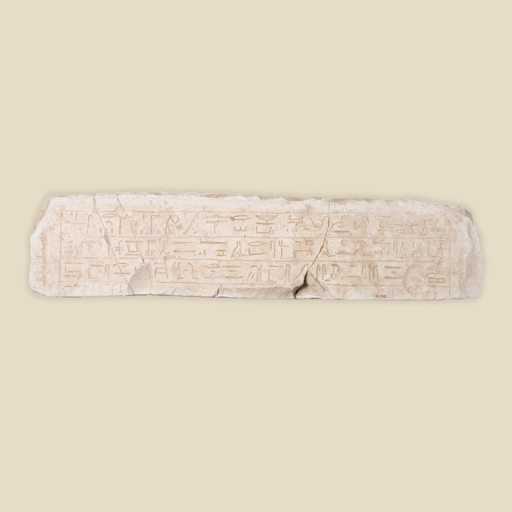 This is a door lintel from the tomb of Nub-khesbed

It is from Abydos, in Grave D31. This lintel above a door in the tomb carries a prayer for the dead Nub-khesbed, in the hope of eternal life as an akh. The hieroglyphs read as ‘A royal offering to Osiris, Lord of Life, Ruler of Eternity, Wep-wawet, Lord of the Sacred Land, Min, Horus, and all gods and goddesses who are in Abydos, may they cause one to be an akh spirit in the sky, power on earth and justification in the necropolis for the ka of the Royal Ornament Nub-khesbed, begotten of Sh… [father], born of Neferty-hor-seneb-tisy [mother], justified, begotten of Redet-wen [mother’s father], … Ren-seneb [mother’s mother?], justified’. This is a door lintel from the tomb of Nub-khesbed It is made from stone. It is over 3,500 years old, dating to the 13th, 14th, 15th, 16th or 17th Dynasty (1795-1550 BCE) in the Middle Kingdom to Second Intermediate Period.