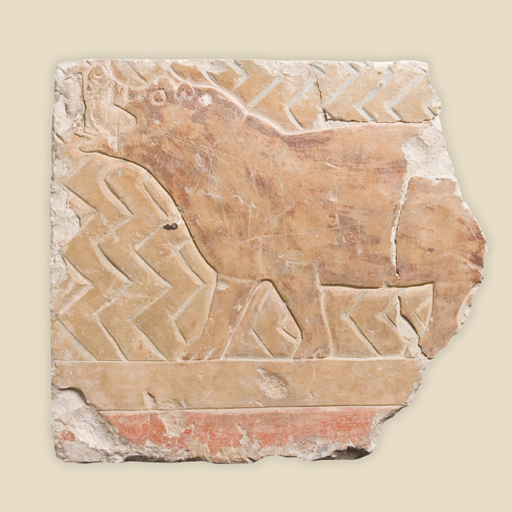 This is a fragment from a temple wall, with hippopotamus decoration.

It is from Deir El Bahari. This piece is from the wall of the mortuary temple of Mentuhotep II. The temple walls were carved with images of warfare and hunting. This hippopotamus is from one of the hunting scenes. The ancient Egyptians hunted hippopotami because they were seen as threatening to people and because they damaged crops. Male hippos were associated with danger and the god Seth, who was the spirit of evil and destruction. Female hippos were associated with Tawaret, the goddess of fertility and childbirth, who was shown as a pregnant hippopotamus. This is a fragment from a temple wall, with hippopotamus decoration. It is made from limestone. It is about 4,000 years old, dating to the 11th Dynasty in the reign of Mentuhotep II (2055-2004BCE) in the Middle Kingdom.