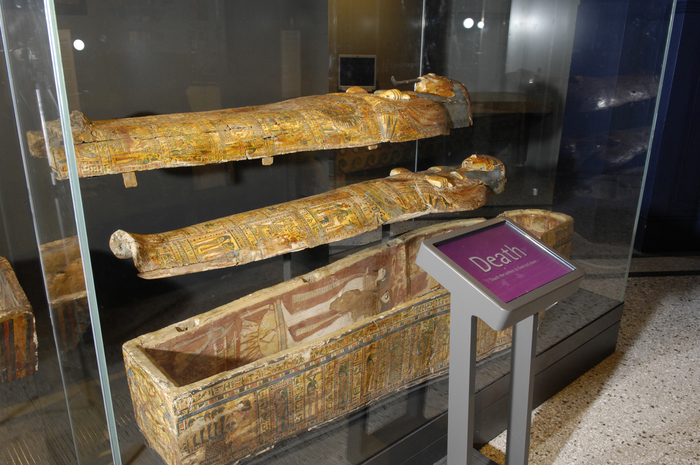 This is the coffin of a man named Hor-em-ken-iset.

It is from Deir el- Bahari, in the temple of Mentuhotep, in pit 7 This three-piece coffin was in fashion at the time when Hor-em-ken-iset was buried. Coffins were covered, inside and out, with pictures of gods and prayers, to protect the dead person and help them on the journey to the Afterlife. On the floor of the coffin case is a figure of Osiris in the form of a djed pillar. Hor-em-ken-iset’s mummy was unwrapped in 1981, because the bandages were rotting. The unwrapping and post-mortem revealed information about his health and death, and about the burial practices of the time. Other research gave information about him: he was a priest and an overseer of the team of builders maintaining the tombs of the kings and nobles in the Valley of the Kings. This is the coffin of a man named Hor-em-ken-iset. It is made from wood. It is over 3,000 years old, dating to the 21st Dynasty (about 1050 BCE) in the Third Intermediate Period.