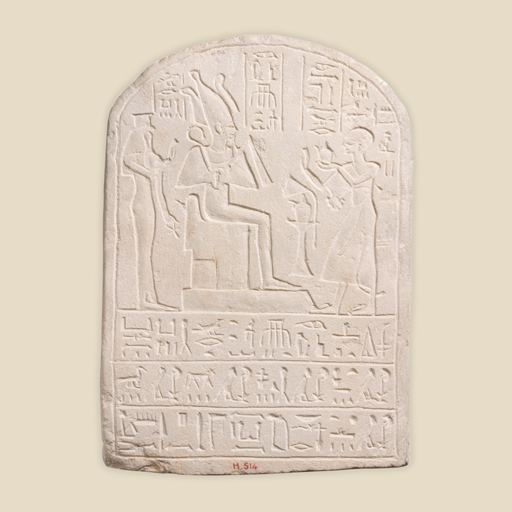 This is an offering stela for a priest called Pen-Amen.

It is from Abydos. Pen-Amen is shown wearing the clean white linen robes and the leopard skin of a high-ranking sem priest, standing before the god Osiris. ‘Great of magic’ is a title used of many gods. The translation reads:Great of Magic, Osiris Khenty-amentiu: offering made by the Priest of the Great of Magic Pen-Amen, justified. A royal offering to Osiris Khenty-amentiu and to Weret-heqau [Great of Magic] that they may give 1,000 of bread, [1,000 vessels] of beer, 1,000 of oxen, 1,000 of poultry, and 1,000 of every food and pure food for the ka of the Priest Pen-Amen, true of voice. This is an offering stela for a priest called Pen-Amen. It is made from stone. It is probably between about 3,200 and 3,300 years old, dating to the 19th Dynasty (1295-1186 BCE) in the New Kingdom.