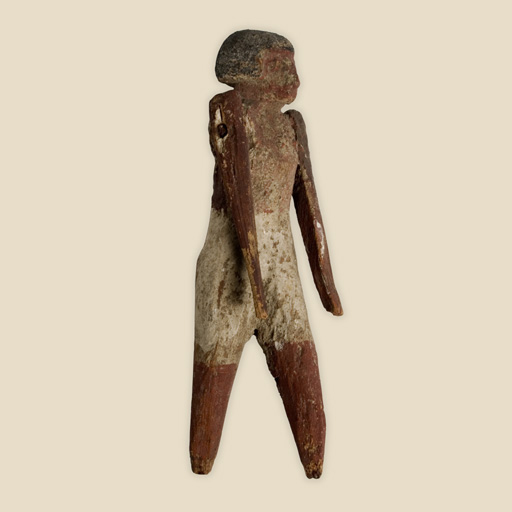 This is a wooden tomb model of a man.

This object is from Egypt but the exact location is unknown. The labouring poor made up the mass of the population of ancient Egypt. Unlike the rich, they did not commission statues of themselves, or leave images carved on stele in their tombs. They could not afford such extravagances. We do get an image of the poor of ancient Egypt from the wall paintings in tombs, or from the wooden servant figurines that were included in tombs to provide the deceased with provisions in the Afterlife. As in life, the rich expected to have servants to work for them. This man is shown with dark skin, as he was working out in the sun every day. This is a wooden tomb model of a man. It is made from wood. It is over 3,500 years old, dating to the 11th, 12th, 13th or 14th Dynasty (2055-1650 BCE) in the Middle Kingdom Period.