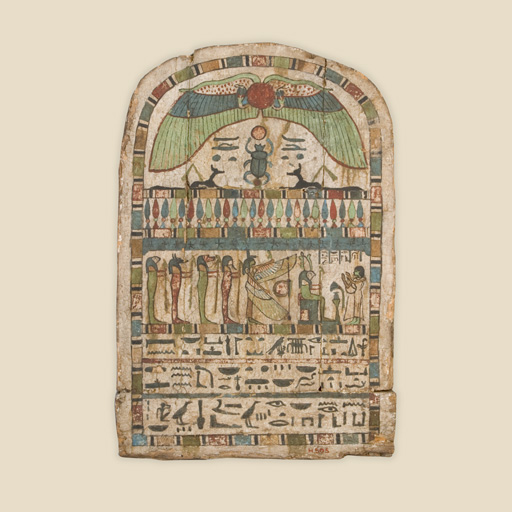 This is a stela for a woman called Irtiru.

It is from Thebes. This stela is a prayer for offerings to a dead woman, Irturu. She is described as ‘Lady of the House’, which usually means the wife and mother in control of the family household. There is no mention of her husband or any children though. She is shown standing before the god Horus. Between them is an offering table. Behind Horus stand his mother Isis and the Four Sons of Re. The hieroglyphs read: A royal offering, an offering which Osiris, Chief of the West, the Great God, the Lord of Heaven gives, of his giving every offering, every food offering, every good and pure thing for the ka of the Osiris, the Lady of the House Irturu, justified, mistress of reverence. This is a stela. It is made from wood, with a painted design. It is 2,500 years old and probably dates from 600-500 BCE, the 26th to 27th Dynasties in the Late Period.